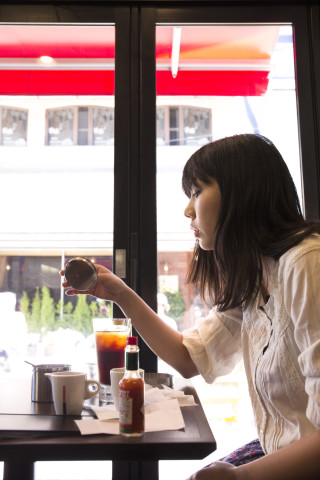 There is Nothing You Can Do for Her

Everyone has the experience of overhearing someone nearby in a café talking and being intrigued by what is being said. This play, shown at the Oita Toilennale 2015, is a 30-minute one-woman show that takes place in a café just like any other. The character is a woman having a cup of tea. The audience only hears her talking to herself. What is she talking about? Enjoy this big story told in a small space.

chelfitsch Theater Company was founded in 1997 by Toshiko Okada, who writes and directs all of the company’s productions. With Five Days in March (premiere in 2004 and awarded the Kishida Kunio Prize for Drama) the company began to juxtapose a noisy choreography deprived from everyday mannerisms to the text. The company’s international debut took place in 2007 when Five Days in March was invited to the Kunsten Festival des Arts in Brussels. The works of chelfitsch have been presented to great acclaim at premiere international theater festivals and venues throughout Europe, North America, and Asia.